This is just a very random post about clocks that I thought up a while ago so please bear with me. Then again this section is called “Ramblings” for a reason; it’s not like it needs to make perfect sense or fit in with the rest of the blog, right?

I’ve always had a love hate relationship with clocks. During the night I hate them. As a child I always suffered with not being able to get to sleep for hours (although once I finally drifted off I was out of it until my alarm went off). The clock was a constant torment then for me as I couldn’t help but check every so often just how late it was. My bedtime was 22.00 and yet I regularly saw 2.00 on the clock. I had to go out of the way to actually check it being as I’m incredibly short sighted and so would have to sit up to check the clock; mostly I had one above my bed so at least I didn’t actually have to leave the bed to see what the time was. Of course I could just have not checked the time but that seemed an impossibility to me. It still very much is. If I was staying at my grandparents house however I didn’t have to check. They had a lovely wall striking clock that my mum now has. It would strike on the hour and the half hour so I always knew just how long I’d been lying there awake. 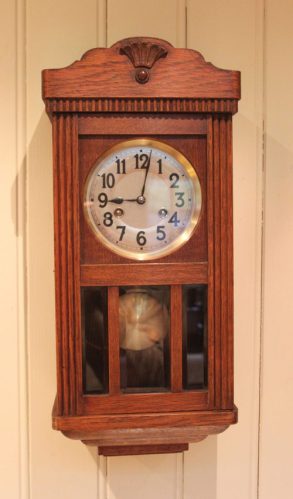 A vaguely similar clock to the one my grandparents had

Now as an adult my sleep habits are very different. Instead I can drop off to sleep very quickly but wake up multiple times during the night. However my time checking habit has not changed at all, the only difference is that due to wearing my Fitbit all night I simply have to raise my wrist, press a button and I can see what silly time I have chosen to awake and how long I have left until that lovely work alarm goes off.

During the day however I love clocks. The gentle tick of a clock lulls me into a relaxed state. For this very reason I do actually have an analogue clock in our bedroom but hidden away on top of the wardrobe. I am not a fan of digital clocks, I don’t know why other than the fact they don’t tick but wherever possible I will avoid having one. Of course I have one on the PC, my boyfriend’s alarm is digital (hence I insist on the analogue in the bedroom as well), my phone is digital… my fitbit is digital too but I would prefer to wear a normal watch though I’m not going to wear one as well as the fitbit. Hopefully I will one day get the wall clock from my grandparents house and that will be wound up every day and tick and chime away. I will be very happy with that though Niall may not agree!

I’m sitting here right now typing away whilst Niall is at his friends house and have no sounds other than the tapping of the keyboard, the hum of the computer and the tick of our round clock. I often spend my Saturday nights like this, just enjoying the peaceful ticking. It’s very rare it happens as every other evening Niall will be gaming so there are noises from his PS4 and usually I’ll be gaming as well or the degus are making a racket (as I type that Diego has started drinking, noisy little beast).

Time of course is a whole different beast. There’s never enough of it unless you want it to go and there there’s far too much! But let’s save that random thought for another post.