“The Great British Bake Off”. In recent years this has become one of the big iconic programmes. Forget “A Game of Thrones”. Forget “The Walking Dead”. “Breaking Bad” is so out of style. This year though, this year is going to be one to remember. A turning point in all our lives. For it is now on Channel 4!

I feel I need to explain this to non-British people (or just, y’know, normal people who aren’t obsessed with it). “The Great British Bake Off” or GBBO has followed a winning formula for a few years now. It has slowly gained in popularity until the cries around the office the following day are “Did you see that amazing wedding cake last night? I can’t believe they got rid of him! Ssssh I haven’t watched it yet, I was forced to go socialise!” It moved from BBC2 to BBC1, it was that popular, into a prime time slot. And then the unthinkable happened. 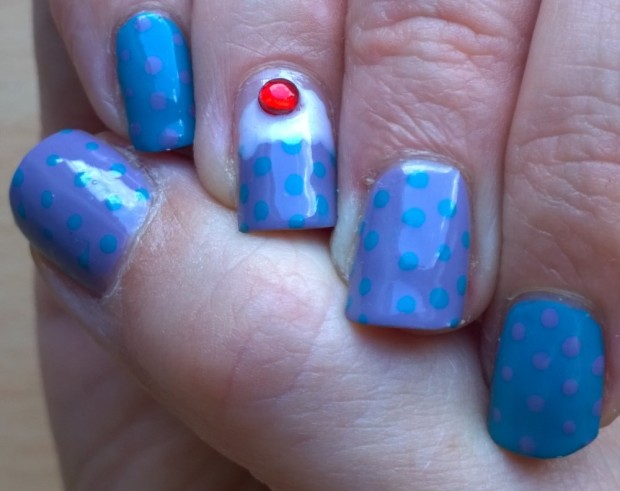 This is how much I love GBBO – I did nails especially for it in 2015. There was even a promotion on the A England polishes I used in my shop.

Last year the company that makes it asked the BBC to renew their contract. The BBC made an offer and it wasn’t deemed good enough. Channel 4 bought it for a ridiculous amount of money. Channel 4.

For those who might not appreciate this difference let me explain it this way. If you go on BBC iPlayer and look at their “Documentary” section you will find the majority of programmes listed are science, health, nature, that sort of thing. If you go on 4 on Demand and look at their “Factual” section you will find sex, brothels, ‘reality’ series. I think that sums up the difference nicely. Now, don’t get me wrong, I will indulge in the odd Channel 4 programme and do love some of their stuff but you can see it’s a completely different take on things.

With the move to Channel 4 we lost 3 key components of the show as well. The amazing Mel and Sue are no longer presenting it and the lovely Mary Berry is not judging. Paul Hollywood has remained as one of the judges and the iconic tent that it takes place in is the same.

My dilemma comes in the form of the replacement hosts. Noel Fielding who is just great and Sandi Toksvig who I have loved as a comedian since I watched her on “Call My Bluff” every lunch time whilst staying at my grandparents over 20 years ago. The two together could be quite hilarious. I have no clue who the new judge is, but apparently she’s quite a well known TV cook so she’s probably ok. They’re making me want to watch it. I want more baked alaska gate. (Seriously, the Red Wedding has nothing on this).

But it’s on Channel 4! In spite of myself I’m starting to look forward to it. Only 4 more days until it starts. Who am I kidding? I can’t wait!