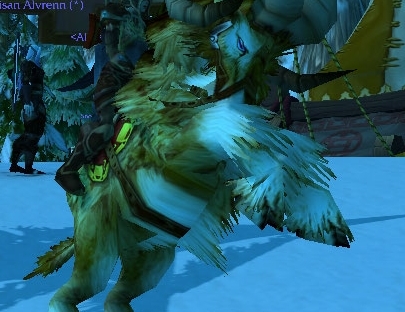 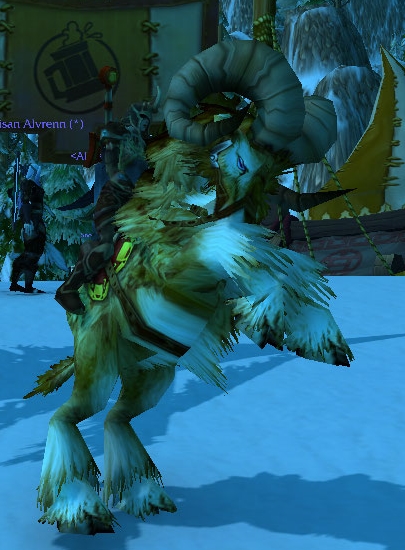 No the picture has nothing to do with the article but like I said before, who wants pictures of blood clots and weird things like that? So instead you can have a picture of my Human Paladin on my rather rare Brewfest Ram mount, why not?

I think I’ve become rather used to the idea I have a DVT now. It has sunk in and things are settling down into a bit of a routine of taking medicine and going for check ups so mentally I’ve almost brushed it aside I guess. That’s not to say I’m not constantly aware of things; I’m far more careful whilst cooking for example as I don’t want to cut myself with a knife. I’ve only ever managed to cut myself once (and that was thanks to a silly flatmate leaving a knife blade up in very soapy water in the sink so I couldn’t see it) but knowing I won’t clot as easily makes me very concious of what I’m doing.

I had my last check up at the DVT clinic on Tuesday and it all went well. My INR had dropped a little from 2.9 to 2.4 so they decided to give me different doses Tuesday and Wednesday just to ensure it stayed in range ready for my first appointment at the hospital on Thurday (where I will now be having all my check ups done). I had a new nurse called Tracy who has 10 cats! We had to have a good discussion about the cats of course and she even said she has a pair that haven’t been spayed/neutered as she thinks they’d have lovely kittens but they’re showing no interest.

Wednesday evening was a bit of a breakthrough for me as I discovered I was able to hobble to the bathroom without using my crutches. You have no idea how freeing that felt but it was very slow and still quite painful.

I was supposed to have seen my GP Tuesday morning as well to get my prescription for my stocking but that got cancelled by the surgery so I ended up going Thursday morning instead. Unfortunately I still didn’t get my stocking as they are made to measure so I got my prescription and dropped it off at the pharmacy across the road. Just as the taxi dropped me off back home the pharmacy rang as it turns out the 3 measurements the clinic took weren’t enough so I had to do another 3 at home myself over the phone. I’m not sure how long it will take for my stocking to come but I hope it isn’t too long. I was also at the GP to see about my high heart rate as mentioned before but when tested it wasn’t too bad. She suggested to buy a home monitoring kit and just keep a months worth of records. My resting heart rate on my fitbit has actually started to decrease again now my leg is getting less painful so hopefully it was just as the DVT nurses suspected and it was the constant pain elevating it.

Later that morning I had my first appointment at the hospital which was just a routine finger prick blood test but as it was my first one there they ran through all the information again (what to do, what not to do, what to not eat etc). Surprisingly as well I was straight in and out; my appointment was actually at 11.30, I got there at 11.24 and went straight through. I was also very impressed with myself as, spurred on by my victory the previous evening, I decided that I could walk it to the hospital. According to Google maps this is only 0.3 miles which considering I regularly walk 7+ miles a day when healthy this is nothing! However it took me about 15 minutes as I went using my crutches and haven’t walked that far in a couple of weeks. I could tell later that day that I had done the walk as my leg felt very tired but it didn’t hurt so that was great. My next appointment is on Monday so I have a few days to let it rest.

Yesterday I let my leg rest a bit but did walk to my friend’s flat which is just down the road (Google says 0.1 mile) with my boyfriend and only carrying my crutches. I was fine doing the walk but later in the evening my calf and ankle became really swollen again so I’ve spent most of today with it elevated again. This could also be because I’ve found I can sit at my desk for a few hours a day rather than the 30 minutes I was previously managing so I’m trying to split it between sitting at my desk and lying down with my leg elevated every hour or so. However I’m still managing entirely without the crutches whilst indoors. I think it will be a while before I can get out and about without them but every little victory feels good. I’m still hoping to be able to go visit my parents in France at the end of October so I have 3 weeks for my leg to sort itself out; if I can get away without having to take the crutches that will be great even if I still can’t walk too much. Here’s hoping!