I’m a huge animal lover and always have been. I grew up with multiple pets, I am a horse rider and I will choose spending time with animals over people any day. Many people have remarked they’re surprised that my career choice has never included veterinary work. So sometimes to me it seems very odd when people seem to see animals as being ‘less’ than us. 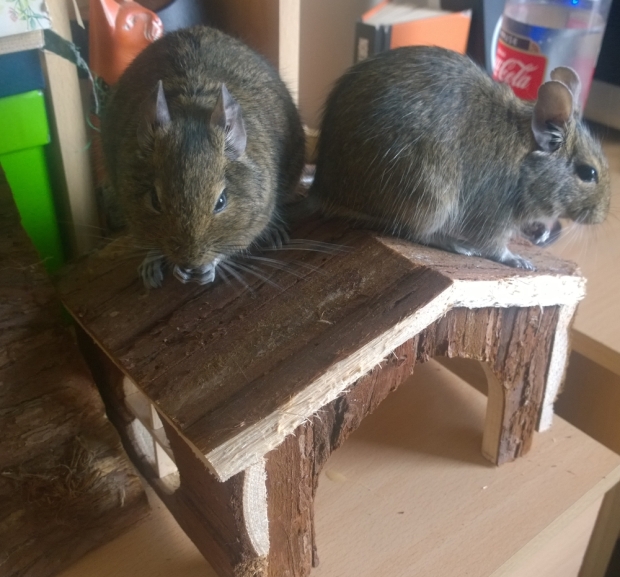 I don’t necessarily mean in the way most of us (myself included) think of animals as being less intelligent; after all they have yet to invent all the things we have, be they good or bad! I mean more in the way that people seem to think of them as somehow being less ‘alive’.

The main thing that has gotten me thinking about this recently is Facebook. I’m a member of 3 degu groups on there and one of the more common questions that pops up is “How long will it take until my new goos trust me?”. These people are clearly animal lovers. Not only have they taken goos into their home but they’ve bothered to join a group and ask questions, they clearly want to learn about their new pets and give them a good standard of life. So it amazes me that they ask something like this, as if a timeframe can be placed down that all goos will adhere to.

Scrat likes to be up high above you

Animals have just as much personality as humans; they have their favourite foods, their preferences towards being handled, you name it they are as individual as any person I’ve met. Not every person you meet will trust you straight away; how many times have you asked someone in the street the time only to get a wary look as they glance at their watch to tell you? Other people you could chat to for an hour in a club and they’ll agree to go on holiday with you! Not only that but people and animals change both based on their experiences and simply as they grow older.

Diego loves to hide in things

Take my goos for example. We’ve had them for 6 months at the time of writing this. When we first got them Diego was the brave one. Every time we opened the cage door he’d be running around the place, jumping and climbing on our arms and just generally enjoying himself. Scrat would be more wary, hiding in corners, venturing out onto our arms after a little while but being very alert the whole time. Fast forward to now and Scrat will come out on our shoulder almost every time you open the cage door. In fact he usually rockets up as fast as he can from wherever he is in the cage and leaps there. You can move your arm and he won’t care as long as it isn’t moved too fast or too far away from the cage. Both goos will happily climb on us whilst out of the cage but when stood at the cage door Diego rarely comes on your arm. Most of the time he just isn’t interested (unless there’s a treat involved!) yet sometimes he’ll clearly want to but gets scared by a movement or noise. Also Diego tends to enjoy tunnelling and hiding under things more whereas Scrat loves to climb and be up high. 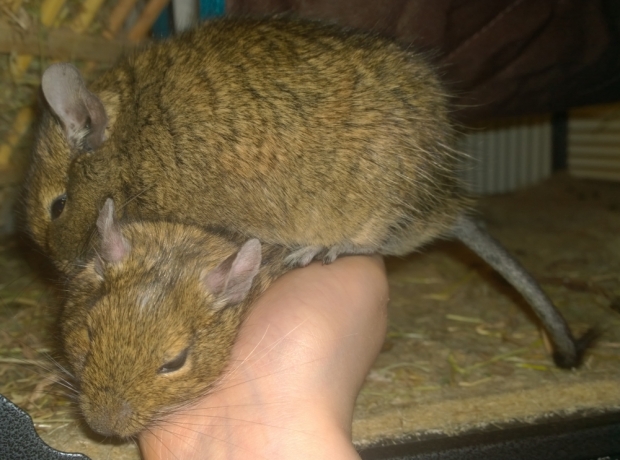 I love it when the goo pile on me

I can understand someone who doesn’t like animals asking “How long until…”; if you’ve never felt compelled to spend much time around them you might be mistaken for thinking they’re not as varied as they are. A lot of animal lovers probably feel that way about farm animals; until you’ve worked on a farm and interacted with a few then cows, goats and sheep often do seem to just wander around doing the same things as each other but they are just as individual as dogs and cats. They just don’t show it to humans because they’re with their own kind and humans generally aren’t that interested in paying them enough attention to find it out either. 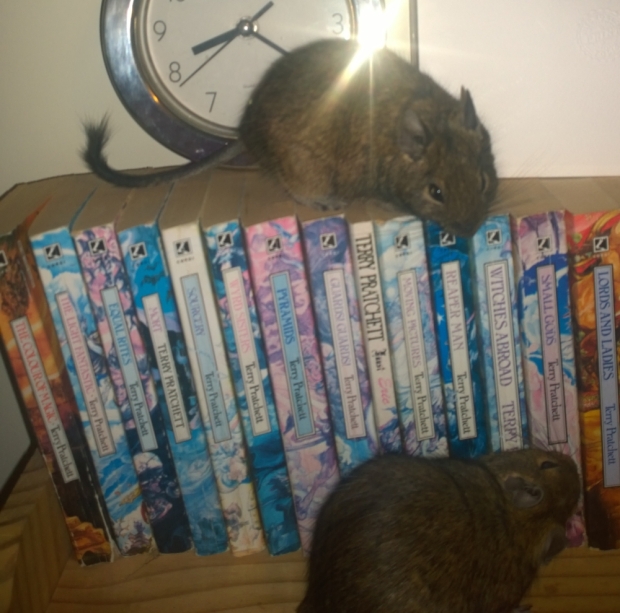 You can always find something they have in common though and in this house it’s not liking the heat. My boyfriend and I hate it when it’s too warm and right now it’s far too uncomfortable for us. The goos seem to be following the trend as they’ve spent the last couple of days sleeping; I’ve got the cage door open for them right now and they’ve come out for a wander round the room but are mostly sitting down near me not doing much. It makes a change from them chewing everything they shouldn’t and me having to run round trying to stop them!

On that note please do remember to look after your pets in this heat wave; unfortunately someone on one of my goo groups (an experienced owner as well) put her cage outside for them to enjoy the sun, made sure her goos had lots of water and shade and yet 3 out of the 4 unfortunately succumbed to heat exhaustion. So be very careful and keep a close eye on your beloved little furballs.

One thought on “Animals as individuals”