Finally the cage was here, it was set up and only missing one thing. The degus themselves. I dialled a taxi then we rushed out to Pets at Home. We’d checked the previous weekend that they still had some in stock and they had 4 boys who had been there for a while. Usually they sell degus from around 6 – 8 weeks old; these poor things were 8 months! I wanted to take all 4 but knew our cage wasn’t big enough so 2 would have to do.

When we got there I went to the till and the lady sent Niall off with one of the guys to go pick out our couple of boys. I was chatting to her about a few things so by the time I joined them one degu was already in our carry case. I watched as another was caught, teeth were inspected, sex was confirmed and into the case he went. The assistant then showed us that they got a monkey nut every night as a treat (something I’ve since learnt they shouldn’t have too regularly) and he gave us a handful to tide them over. Off we went to pay for them (laughing to myself as the receipt stated “Degus – pack of 2”) and leapt into our waiting taxi. We could hear scrabbling coming from the case but couldn’t see anything.

Check out my teeth!

Home at last and now was the fun part. To get them into the cage. Neither of us had handled a degu before and we didn’t know how these would react. The staff apparently interacted with them quite a lot so they were fairly hand friendly but we were strangers, we knew we’d smell different and they’d probably be stressed out from being seperated from their brothers.

We got the case open and I looked in. One was running about nervously, the other was just sat frozen in place. I reached in and got hold of the frozen one. He didn’t move at all, he was terrified. I lifted him out and placed him in the cage. He instantly ran into a corner behind the flying saucer wheel and sheltered there. It took him about half an hour to move from there as he was very nervous.

This was them the first evening exploring around the cage. Scrat hiding away at the back there still, Diego being more adventurous

In the meantime I offered Niall the honour of getting the other boy out. Well that turned into a fun “chase me round the case” (bearing in mind it’s probably no more than 30cm x 20 cm) as he couldn’t get a purchase on the little critter. We had put hay in the bottom as well so he dug into that then continued to run round leaving me in stitches at the sight of a moving lump of hay evading my boyfriend’s hand. Eventually we gave up and simply tilted the box up by the cage; the little goo finally came to the edge and peered out for a few minutes before rushing to the back of the cage.

This is what we brought them home in and they still managed to evade Niall’s hand!

Now we observed. The first one out wouldn’t move for ages, he was terrified. The other one however was out and exploring the cage within a few minutes, running all over the bottom level where we had put them. My friend had already suggested one of them should be called Diego but we hadn’t decided on a name for the other. I decided Diego sounded like an explorers name and so the brave one became Diego. Niall and I had bounced a few other names around beforehand and upon declaring this he then decided that as the other one seemed nervy we should call him Scrat after the Ice Age character. 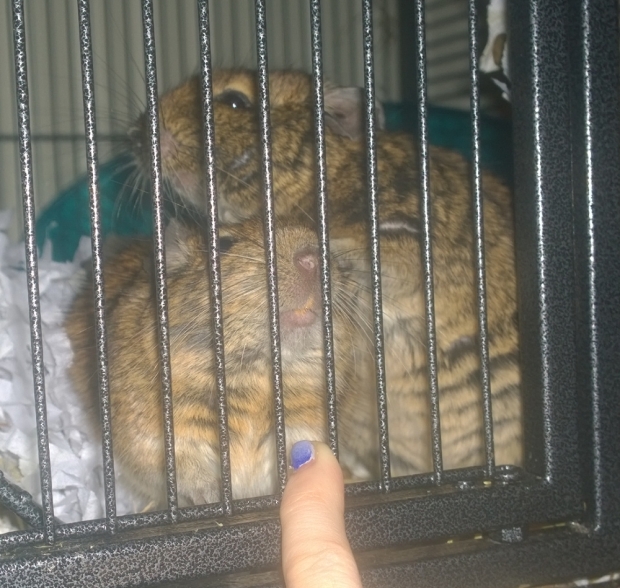 Diego was living up to his name already. He figured out the ramp and ventured up to the second and third levels whilst Scrat was still cowering in his corner. He’d explored pretty much everything by the time Scrat decided to move although he was clearly still very nervy too. Scrat kept popping out, having a quick sniff at things then getting spooked, giving the alarm call and then running back to his corner. Diego would run to the nearest bit of shelter upon hearing this alarm but would pop back out within seconds. We decided to leave them be just to let them settle down.

One thought on “The degus come home”