I will finish my story of how I got my goos but I wanted to write up something a little more interesting (to me at least). The really good posts will be when I tell of all their crazy antics but for now I’m interested in their diet. Sorry!

Degus have to have a very strict diet. They are very susceptible to diabetes and as such can’t have anything slightly sugary. This rules out all fruit and some more surprising vegetables too. They also can only have degu-specific commercial pet feeds and treats as a lot of other small animal feeds have molasses or other sugar-based additions.

It seems there is a lot of misunderstanding out there as well around what is appropriate for them and it can also change depending on your financial situation. The most commonly given advice which I have of course followed to start with is to feed them a commercial degu pellet or nugget along with lots of hay. Always unlimited hay. This helps to prevent issues with overgrown teeth and keeps their digestive system moving. The commercial nuggets/pellets are supposedly be nutritionally balanced for your goos and also hard enough to help with wearing their teeth down.

Boring looking nuggets. But Diego was enjoying them.

Now it turns out a lot of them generally aren’t that great although my boys do seem pretty healthy from it. They have shiny coats and bright eyes, no dental issues (though they are only young and I haven’t had them that long so we don’t want to jinx that) and have plenty of energy. However this doesn’t mean they’re getting the best diet necessarily. We have changed it since we first got them slightly anyway. Originally we were giving them 10g of Pets at Home degu nuggets each along with aforementioned unlimited hay. We then changed that to be 5g Pets at Home degu nuggets and 5g Baephar Xtra Vital Degu pellets as it looks more interesting and is more expensive (so hopefully better!), partly brought on by another local goo owner advertising some cheaply as it didn’t agree with her degus stomachs. 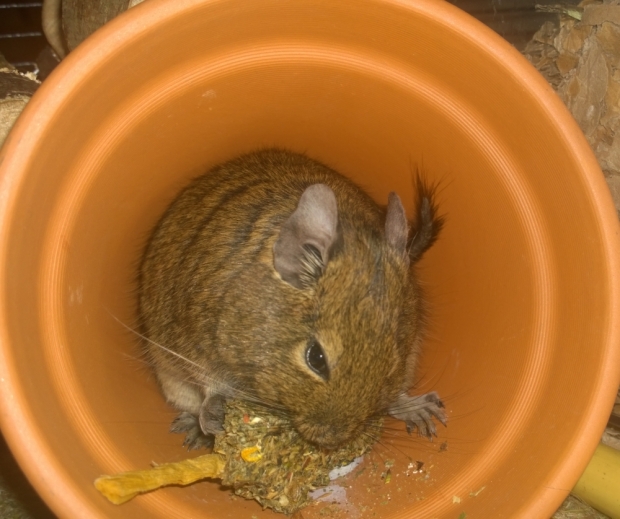 Sometimes you just need a treat. In a flowerpot.

We then moved this to also include dried herbs that are goo safe from a Facebook page that is active in the goo community and the boys love this. They still love their pellets (they have certain bits they pick out before anything else) but clearly the herbs went down a treat. They particularly love dandelion heads, tasty! However as I was looking to expand on this I came across the SAB diet.

The SAB diet is a “Species Appropriate and Balanced” diet and has been researched to create a more natural and nutritionally superior diet for degus. It is of course not going to be as cheap as nuggets but will be much better for them in the long run (and if it can stave off vet visits may work out cheaper overall I guess) and hopefully far more enjoyable. It consists of certain flowers, herbs, leaves and seeds that the goos can pick and choose from as they like and it should give the correct ratios of all the important nutrients. I’m going to wait a little while before implementing this simply because we have so many nuggets still around but I definitely want to introduce this more natural way of feeding them. Some people go out and collect or grow their own plants for this but as I live in a large town with only a balcony I wouldn’t be able to keep up a reliable supply so I will be buying a ready made mix from Germany. Once I do implement it I will post how they are finding it and if I’ve noticed any difference in their health.

One thought on “Degu diet”