Most people have never heard of degus. I’d never heard of them until I went into Pets at Home in Hull on my way over to France way back in 2010. I was with Dad and we were killing time waiting to be able to go to the ferry terminal and ended up wandering in here. In the centre of the store was a huge cage with what seemed to be half a tree upright in it and a ton of shelves with all these lovely little rodents running around and climbing about. The sign next to them proclaimed they were degus. I immediately wrote this in my phone notes as I knew I’d never remember that name. 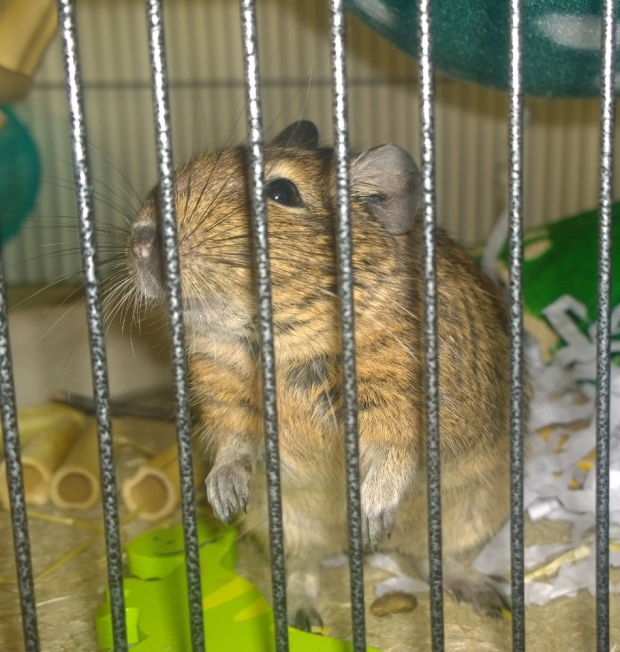 Fast forward to December 2015. Until now there is no way I could afford a pet. I’ve always had pets growing up (dogs, cats and budgies) plus am a general animal lover anyway and not having pets since I moved out from my parents has driven me crazy. The odd fix of looking after my friends cat and visiting my parents and their cats just doesn’t cut it. So I informed my boyfriend we were getting mice. I had been chatting with a friend at work and we’d got it all planned out. Then I remembered the phone note and went to do some research on degus.

I was instantly sold. The main thing that had always put me off mice had been their limited lifespan. A couple of years is long enough to get attached to them then bam, they’re gone. No one needs that. Degus however can live between 6 – 8 years and have been known to reach double figures. Further research yielded that they’re sociable creatures so you should always have at least 2, they are diurnal unlike most rodents who are nocturnal and are very intelligent. They have actually been observed using a tiny rake to get food out of a space they couldn’t fit in!

They do have more specific dietary requirements than most small pets as they are highly susceptible to diabetes. It’s due to this fact that they actually entered the pet market at all; they were first snapped up by scientists to do research into diabetes and eventually someone realised they’re loving, funny little creatures. Next thing you know they’re on the exotics list though still relatively unheard of. This means you have to buy very specific foods for them (more on that in another post) and have to watch their sugar intake. Like most rodents they require hay available constantly to keep their teeth worn down and they love to chew everything. I mean everything. So you need to get wooden toys for the cage to keep them occupied and be prepared to replace them regularly. Anything more permanent such as wheels and the cage itself should be metal. 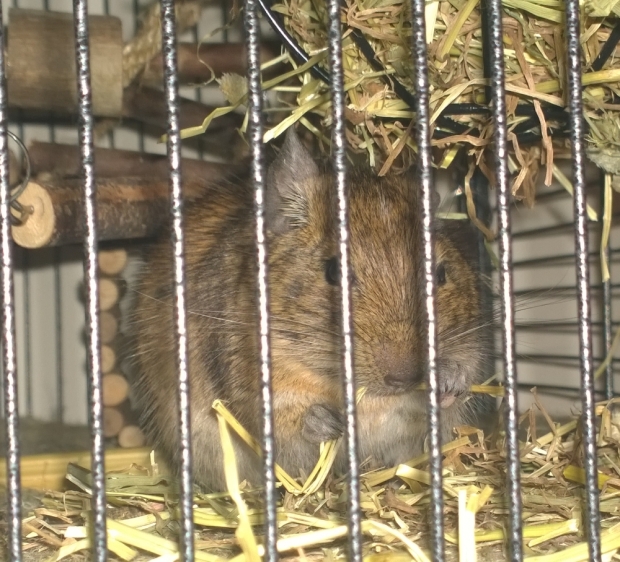 I spent a good couple of weeks researching all their requirements. My boyfriend had no say in the matter, I just came home one day and said “I’m fed up without pets, we’re getting degus. It’s my Christmas present to me.” Before he knew it I’d ordered a cage, had my friends take me to Pets at Home to get the toys, accessories and food (and also to check they had some degus in stock) and was pretty much all set aside from the cage arriving.

So there we had it. A week before Christmas and I was just waiting on the cage to be delivered then I could go pick up my new babies. I couldn’t wait! Unfortunately it wasn’t to go as smoothly as planned. But that’s a post for another day.