Want to know a bit more in depth about our loveable, crazy little degus? We currently have two little brothers although they’ve completely captured my heart so eventually I’d love more. Two for now is enough of a handful though! We don’t know their exact birthday but based on what we were told (8 months when we got them in December) and the fact they’re completely crazy we decided they’re clearly April fools and will celebrate their birthdays on 01/04.

Name: Diego
Nicknames: Little one, Fuzzbum, Scuttlebutt
Date of birth : 01/04/2015
Colour: Agouti
Distinguishing features: Small white star on his forehead, lighter brown than Scrat
General: Diego seems to be the young at heart one. He’s much smaller than his brother and tends towards mad dashes around the cage and getting very hyper before completely crashing out with tiredness. Now he has figured out how to use his spinning saucer he is rarely off it, he must run for a good 3 – 4 hours a day at least. When we first got him he seemed to be the most adventurous but he also tends to take a scare more to heart and doesn’t snap out of it very easily. He tends to be the boss of the cage despite his small stature though he’ll occasionally give in. 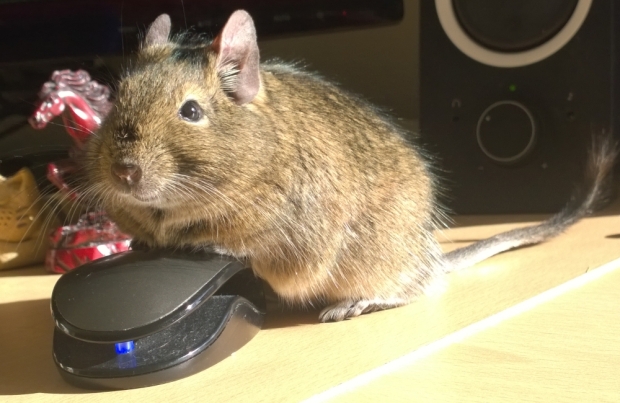 Name: Scrat
Nicknames: Scratman, Fatman Scrat, Fatty, Scratty
Date of birth : 01/04/2015
Colour: Agouti
Distinguishing features: Dark patch on the back of his neck; seems to be where the fur just parts to show his skin more
General: Scrat is a bit more chilled than his brother though he definitely has his hyper moments. We joke that he’s fat but he’s actually an ok weight for a degu, he’s just naturally quite a bit larger than Diego particularly when he puffs up his fur. He’s often more shy in new situations but tends to be happier with humans. I suspect he may be the more intelligent of the two as he is the one who is more likely to start chewing the cage bars (I assume from boredom despite all the toys they have but Diego stays more interested). He is quite clumsy; the number of times he’s fallen off ledges or failed to make a jump is more than I could count. Even a very small jump of just a few inches. I have seen him jump nearly 2 foot though so he clearly can do it.